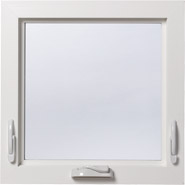 Awning windows are exactly how they sound. They feature a simple hinged top that allows the window to open outward allowing the glass to protect the window’s opening in the same way an awning would, thus the name. Their versatility is why an awning window makes an ideal accent above and even below picture windows

Even during rainy weather, awning windows can provide great ventilation which is they are also frequently used in basements since they can be placed in high areas to allow both light and air into a space. They are also similar to casement windows in the sense that they are generally opened with the use of a hand crank and feature screens that are on the inside of the window where it can be more protected from the elements.