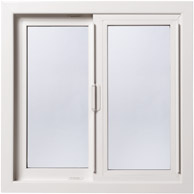 Horizontal slider windows are a popular choice for when it comes to meeting specific bedroom egress standards and are also a favorite choice for homes that feature a contemporary or modern style. With horizontal single slider windows, only one side of the window will slide open, whereas both sashes will slide open on horizontal double slider windows. Double sliding windows are generally a good choice in rooms where you want to maximize air circulation, making them a good choice if they are the only window featured in the room.

A horizontal sliding window is the perfect option for easy-opening in areas that might require a reach such as over kitchen counters and sinks. Many users also find that these style windows are much easier and faster to open than those that feature a crank-style awning or casement window. Furthermore, horizontal sliders are ideal because they do not take up any exterior or interior space, so they work great in smaller areas.